A compact mountain hamlet consisting of an historic farmhouse and three cottages situated in a beautiful wooded valley in the hills above Lucca, at the edge of the Garfagnana National Park. 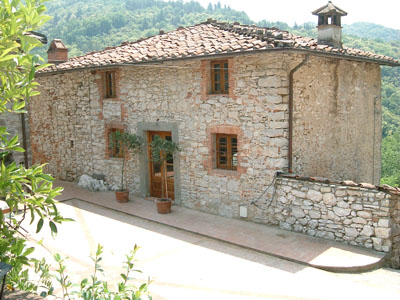 The houses date from the mid 1700s and have many original features, including exposed stone walls and original ceilings with chestnut beams and cotto tiles. The property is set in three and a half hectares of pine and chestnut wood, with over 100 olive trees and other fruit trees, with beautiful views over the valley. There is small swimming pool.

Originally built in 1743, the substantial farmhouse was completely restored in 2004 with new chestnut beams and handmade terracotta tiles. A new, handmade wrought iron and chestnut staircase was added. The work was completed with handmade, chestnut windows and doors.

On the ground floor are the kitchen, dining room and utility / shower room. The large, eat-in kitchen has a SMEG cooking range, as well as lower kitchen units in dark grey and the upper units in white, complementing the original stone walls. Large wrought iron and glass doors exit to the rear terraces and provide light into the kitchen. The dining room has a high ceiling with chestnut beams and terracotta tiles. Atmosphere is created by the original stone walls and a large rock that is part of the foundation of the house. The large utility room has a shower, WC and bidet, with plenty of room for washing and drying machines. 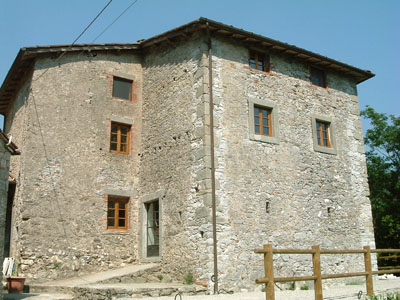 A sweeping iron and chestnut staircase leads to the first floor, which at present is arranged as a suite of three sitting rooms, providing a wonderful entertaining space. Each of the rooms has ceilings of chestnut beams and terracotta tiles, as well as original shelving alcoves built into the wall. The Sitting Room has a large, =working fireplace and double doors leading to the marble paved courtyard. The Summer Room, open to the staircase, has double aspect views across the valley, making it light and airy in the summer. The Winter Room has another large fireplace and an iron wood burning stove. A door leads from this room onto a small, raised terrace that gives wonderful views across the valley.

The large bathroom has been designed to the highest standards. It is tiled in travertine stone and has a large shower, well over two metres high. There is also a ‘slipper’ bath with claw feet, which sits at an angle to the window, allowing a wonderful view up the valley from the bath. There is also a WC and bidet from Pozzi Ginori, in white china.

Beneath the farmhouse is a small laundry room used by guests in the three cottages and with independent access from the farmhouse.

La Roccia is situated across the marble courtyard from the farmhouse. It is named after the massive boulder built into the kitchen that forms the foundation of the house. Downstairs, this traditional two-storey farmhouse has a large eat-in kitchen, which has chestnut cupboards, marble worktops and a dishwasher. The ceiling is original with chestnut beams and terracotta tiles. There is an original, working fireplace in the kitchen. On the ground floor there is also a double bedroom and a bathroom with a shower, sink, WC and bidet.

Up the wrought iron staircase, you’ll find a two zone, double width sitting room, a double bedroom and a bathroom with a tub. There is currently a sofabed in the first half of the sitting room. This area could easily be made into a third bedroom with the addition of a simple wall. There is an open fireplace in the sitting room. The house overlooks the valley and has two private, outside terraces.

La Stalla, formerly the old stable dating from 1743, is a two storey cottage. It has a pretty sitting room with a wood burning stove and a kitchen downstairs, and one double bedroom and a bathroom with shower upstairs. The private, outside terrace has extensive views over the valley. The cottage is about fifty metres from the other houses and overlooks – but isn’t overlooked by – the swimming pool.

Il Forno is the second of the smaller two storey cottages. It was originally the old bakehouse and still has the original, full size wood oven in the sitting room. La Stalla has its sitting room and kitchen on the top floor and a double bedroom and a shower room on the ground floor. The bedroom has double doors onto the private, outside terrace, which will allow you to enjoy extensive views over the valley from your bed. The house is shaded by a large fig tree.

The pool measures 8 x 4 metres and gives wonderful views across the valley. The whole area was remodelled in 2004, with the addition of a brick path with stone steps, a large brick patio area and a wooden deck suspended over the valley.

The hamlet is accessed via a long concrete drive. At the end of this is a wall with large wrought iron gates. Next to the gates is shrine dating from the 1740s, which is also owned by the property. 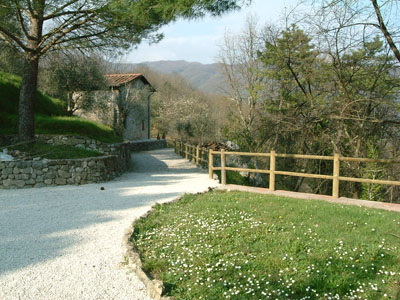 All of the buildings are connected to mains water and electricity. There are two gas tanks, one of 1,500 litres and the other of 1,000 litres which are filled by tanker. All of the buildings have full independent gas central heating. The farmhouse is heated by a new Thermorossi furnace, which burns wood. It is far more economical to heat such a large house in this way, although the system can be switched to gas if necessary.

Each of the houses has a new, gas combination boiler. There is an annual service contract with local, registered technician.

The hamlet is close to the beautiful hill village of Pescaglia, perched at the top of a steep hillside and about 18km from Lucca. Restaurants and shops are located within a few minutes' drive.

We have lots of photos and floorplans for all the buildings. Don't hesitate to get in touch if you require further information.